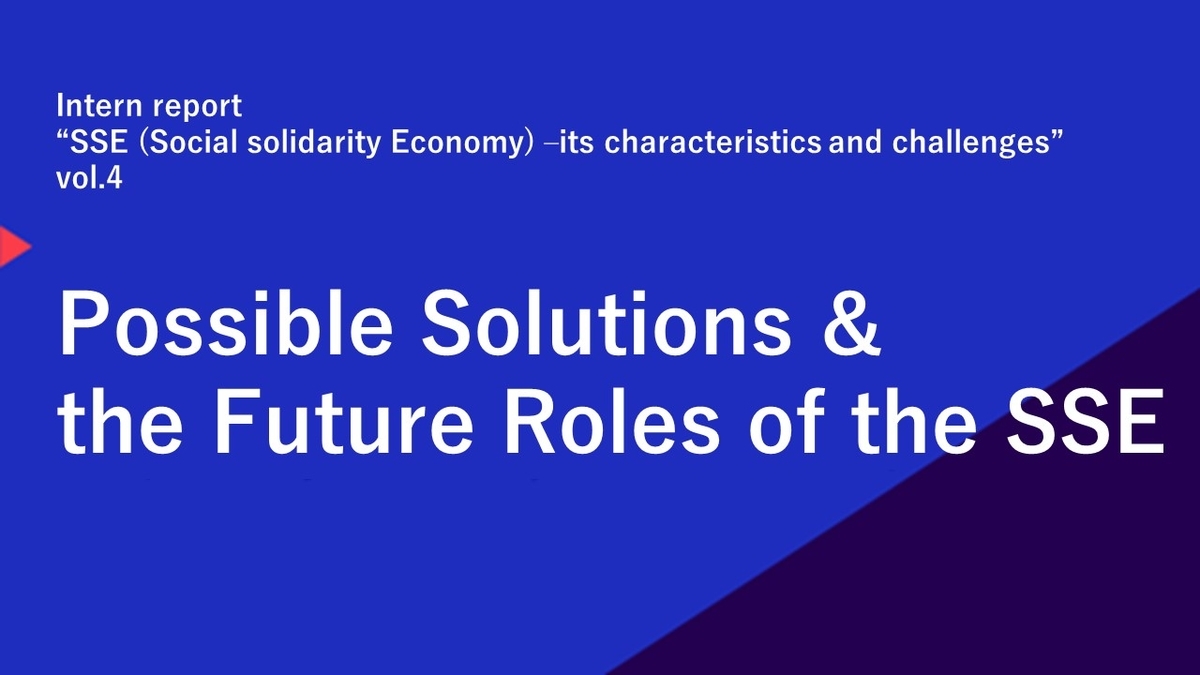 Please check out previous posts at the following links.

Vol.2  ILO and SSE ~How the ILO deals with the SSE

4．Possible solutions against the challenges

SSE needs unique process to raise funds. At guarantee and stable income, one of these processes, public funds and governments’ roles are important. We will see some example of public entities played a large part in guarantee or income. In Quebec, local governments and local financial institutions played a large part in developing SSE. In India, large financial dependence on local governments may sometimes dangerous for cooperatives.

An example of Quebec shows that policy making and discussion among local governments, financial institutions and SSE leads to making the ground where SSE are easy to do their business. On the other hand, SSE’s dependence on local governments will sometimes cause them harm. For example, SSE which highly depend their profits on public procurements of local governments are influenced by policy change or conflicts of political parties.

This case shows that high dependence on public procurements will threaten the existence of SSE while public procurements are important in creating sustainable employments. It also shows that supports with professional knowledge and SSEs’ efforts to develop markets are effective to those challenges. ILO also provides technical support to build capacities of SSE.

We have seen the role and importance of public funds for SSE, however, private funds also play a large part in financing to SSE. Among private funds, especially these two are expected their contribution to SSE: finance by cooperatives and finance based on social performances.

Kyosai is a mutual insurance provided by cooperatives. Cooperative financial services are different from purely commercial schemes because they focus on serving their local customers and members, rather than on maximizing profits. As SSE tends to have financial risks more frequently than pure commercial enterprises, this cooperative scheme is helpful for SSE to get stable funds. In Japan, labour banks (Rokin) and credit unions (Shinkin) are among cooperative financial institutions.

5．Conclusion: The roles of the SSE in the future

I hope this report successfully introduces the important roles of SSE in creating Decent Work and necessities of involving various actors including governments and financial institutions to develop the SSE. As a conclusion, I’d like to show my points of view about how SSE should be dealt with in public policy and what kinds of roles SSE should play in the future.

I’ve pointed out the possibility of change of SSEs’ characteristics depends on whether governments consider SSE as a policy tool or policy objectives. It is important to keep basic traits of SSE, social objectives, cooperation and democracy while achieving policy goals including creating Decent Work. In order to do that, it is necessary for governments to recognize actual situations of SSE and institutionalize it. In Japan, cooperatives are regulated separately depending on the fields of their business and NPO or other incorporated associations and foundations are regulated depending on their legal personalities. I think it is important for governments to define the basic values of SSE crossing sectors and legal entities and to cooperate with SSE and commercial enterprises in order to achieve policy goals without deteriorating the values of SSE. If there is no definition of SSE, the differences of commercial enterprises and SSE will be diluted. It is important to recognize advantages and disadvantages of both SSE and commercial enterprises and maximize their performances because SSE is not a panacea to social issues and commercial enterprises also play important roles. For this reason, we have to know what is SSE and which organizations fall into the category of SSE.

In the world of work, SSE including cooperatives have played a part in formalizing informal employments, financial inclusion and providing social protection, job training and employment opportunity to fragile workers (youth, women and people with disability) until now. They have provided minimum required safety net to people. In the future, their roles will expand to create Decent Work by ensuring high productivity and sustainability of their businesses. This means that SSE should cooperate with commercial enterprises and work on innovation actively. For example, SSE will play a role in protecting workers in global supply chain and in connecting people from different areas by using online platform. The more frequently SSE work with commercial enterprises, the more incorporated SSE will be in their supply chain. SSE will be expected to protect their workers in such a situation. As for the platform SSE, SSE will intermediate workers with people in needs like platformers do these days. In Europe and US, there are some platforms which intermediate home care services provided by immigrants or manage accommodations by communities. In Japan, cooperation among remote areas will be important in aging and declining society.

Thank you for reading the report!