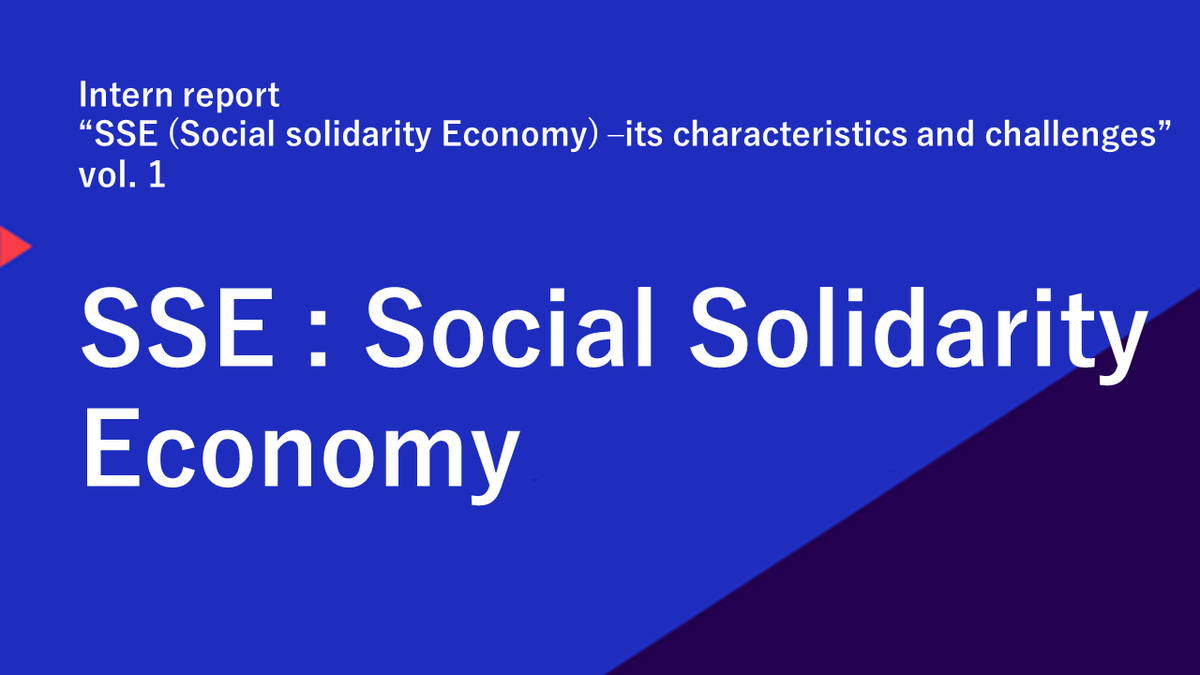 Works for Japanese financial institution from April 2020 after completed the degree of M.P.P. at Tokyo University Graduate School of Public Policy. At the same time, enrolled as an intern at the ILO Office for Japan (Aug.2019-Feb.2020). Major interests are labour policy and finance.

Responsibility for viewers expressed in the article rests solely with the author and it does neither constitute a view of my organization nor an endorsement by the ILO.

As an introduction, I share some reasons as to why I started researching on the SSE. I worked as an intern at the ILO Office for Japan for half a year and learned about “cooperatives” and “SSE” during this period. This was the first time for me to think about the differences between traditional businesses and cooperatives and the wider SSE, even though I had come across some forms of SSE enterprises such as agricultural cooperatives and university cooperatives. I started this research because I wanted to learn more about SSE’s role in the world of work. Moreover, as the ILO Cooperatives Unit celebrates its 100th anniversary this year, it is a good time to think about the role of cooperatives and the wider SSE for the future of work.

The ILO Regional Conference on “Social Economy, Africa’s Response to the Global Crisis” that took place in Johannesburg in October 2009 posed a provisional definition of SSE, though there is no official one by ILO. Since then, this definition has also been referenced in ILO and ITC Turin academies since 2010 and adopted by the United Nations Task Force on SSE (UNTFSSE). According to this definition, SSE is a “concept designating enterprises and organizations, in particular cooperatives[1], mutual benefit societies, associations, foundations and social enterprises[2], which have the specific feature of producing goods, services and knowledge while pursuing economic and social aims and fostering solidarity”.

Some may be more familiar with the term “Social Economy” or “Solidarity Economy” than the SSE. The SSE is the umbrella term of both Social Economy and Solidarity Economy which have developed independently. The UNTFSSE was established in 2013 to raise the visibility of the SSE within the UN system and in international knowledge and policy circles, particularly to factor the role of the SSE into discussions around the post-2015 development agenda. Since then, there has been a growing attention to the SSE in policy making (Mendell & Alain, 2015; Utting, 2015).

The UNTFSSE raises some points in their report with regard to SSE policy making[3]. It says there are two steps in the involvement of the SSE in public policy: the first step is “instrumentalization” and the second step is “institutional isomorphism”.

In short, it is important to know that public policies supporting the SSE are largely affected by existing policy regime and development strategy, though the idea of the SSE is more and more prevalent in the world of development. What is more, the SSE is understood differently depending on peoples’ interests and values.

In this context, some fear that involvement of the SSE in policy making alongside existing institutions may subordinate social and environmental goals to the financial/economic objective

It is thought that SSE’s roles and characteristics will be different depending on whether it is used as a policy tool or it is set at the center of policy making.

[1] According to ILO’s Promotion of Cooperatives Reccomendation, 2002 (No.193) and ICA’s statement on the Cooperative Identity (1995), an autonomous association of persons united voluntarily to meet their common economic, social and cultural needs and aspirations through a jointly owned and democratically controlled enterprise（ILO）

Next article is about how the ILO has engaged with SSE. To read the next article, please click here!