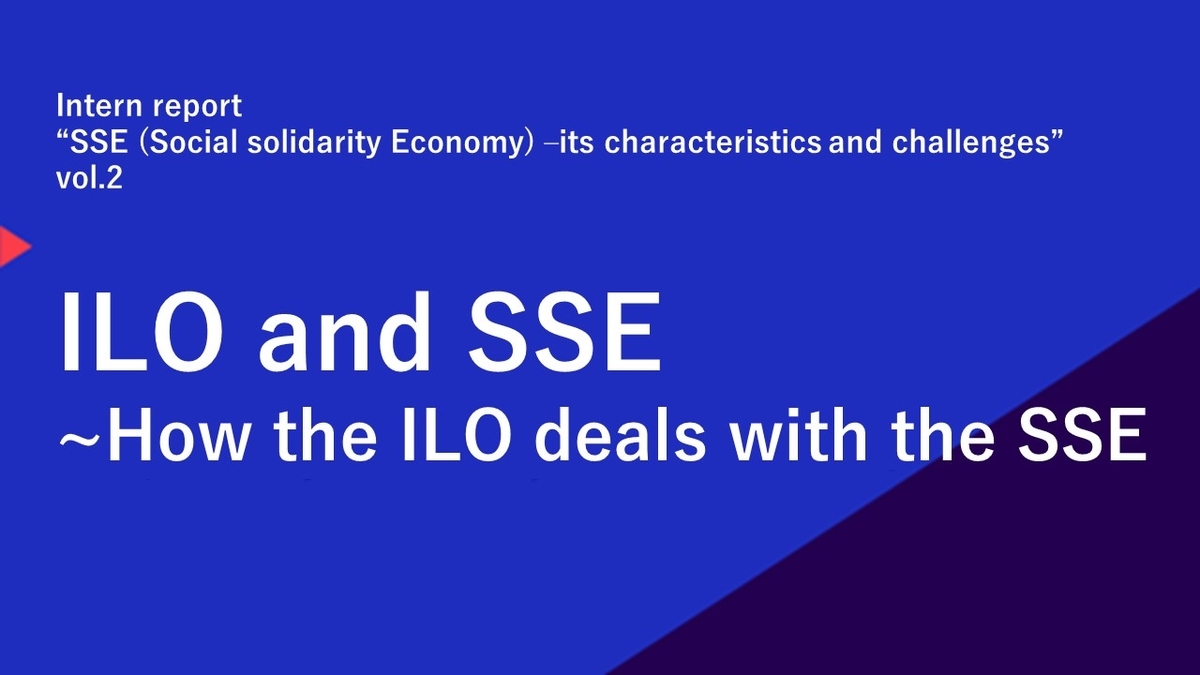 For Vol.1, please check from here.

This chapter introduces how the ILO deals with the SSE despite the ILO is known to be the organization of labour, by showing some examples of ILO’s works on the SSE.

In addition to the R. 193, the ILO’s commitment to advancing the SSE is based on its Constitution that provides a consultative status to international organizations of cooperatives, and on the 2008 ILO Declaration on Social Justice for Fair Globalization which states that, in a globalized world, “productive, profitable and sustainable enterprises, together with a strong social economy and a viable public sector, are critical to sustainable economic development and employment opportunities”. The ILO and its International Training Centre in Turin has organized the Academies on the SSE since 2010, inviting practitioners and policy makers from all over the world to learn about SSE. In 2019, the 10th and the 11th editions of SSE Academy were held. The 11th edition was held in Spain from 14 to 18 October, where participants declared the importance of the SSE in creating employment and economic growth and the potential of the SSE which divergence economic systems to alleviate inequality of society and region through equal redistribution system.

The ILO is also one of the founding members of the UNTFSSE mentioned above, and take turns to host its chair and secretary with other organizations. In 2019, the ILO hosted an international conference at the ILO HQ in Geneva from 25 to 26 June as a chair of the Task Force. There, the manager of the ILO’s Cooperatives Unit explained how the SSE contributes to vulnerable people such as refugees and immigrants. Vic van Vurren, Director of the ILO’s Enterprise Department, claimed to increase the recognition of the SSE and scaling its influence and size, emphasizing the importance of the SSE in balancing economy, society and environment[2].

The ILO Centenary Declaration for the Future of Work adopted at the 108th session of the International Labour Conference states that “(…) the ILO must direct its efforts to (…) supporting the role of the private sector as a principal source of economic growth and job creation by promoting an enabling environment for entrepreneurship and sustainable enterprises, in particular micro, small and medium-sized enterprises, as well as cooperatives and the social and solidarity economy, in order to generate decent work, productive employment and improved living standards for all”[3].

Next, as examples of cooperatives and other SSE organizations contributing to job creation, we will see the cases of SEWA in India, Workers Cooperatives in Japan and Big Issue in Japan.

From this, we can understand how SEWA has provided social security and voices to both fragile women workers and informal works themselves.

We can recognize that cooperatives and social enterprises in Japan are trying to create jobs for fragile people.

[1]This recommendation recognizes the importance of cooperatives in job creation, mobilizing resources, generating investment and their contribution to the economy, and recognizes that cooperatives promote the fullest participation in the economic and social development of all people, recognizes the globalization has created new and different pressures, problems, challenges and opportunities for cooperatives. It requires member countries to take measures to promote cooperatives. It also mentions the roles of labour and management with cooperatives, interactions and international cooperation. Normlex(R193-Promotion of Cooperatives Recommendation, 2002 (No.193)) https://www.ilo.org/dyn/normlex/en/f?p=NORMLEXPUB:12100:0::NO::P12100_ILO_CODE:R193

Next article is about two main challenges that the SSE faces. Stay tuned for the update!