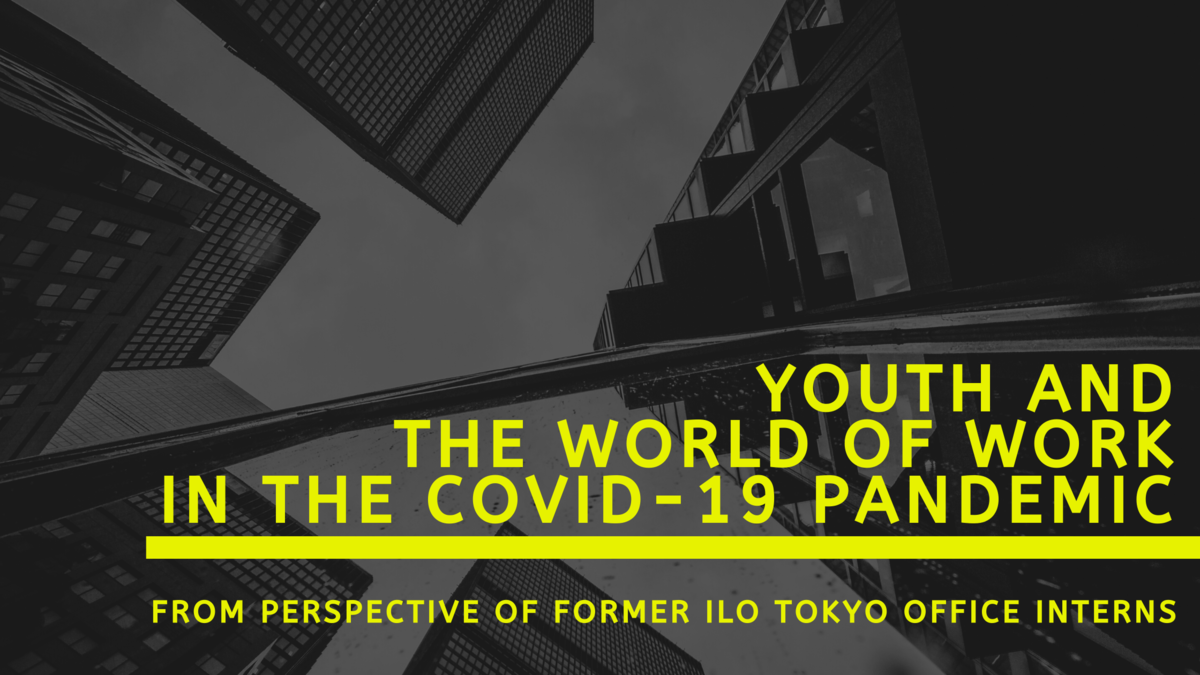 COVID-19 has transformed our lives and exposed the challenges faced by different groups, including migrant workers and women. The ILO Monitor: COVID-19 and the world of work. Fourth edition and "Youth&COVID-19: Impacts on Jobs, Education, Rights and Mental Well-being," point out the severe impacts of the COVID-19 crisis on young people such as a significant increase in unemployment and suspension of education and training.

Inspired by the ILO survey on the impact on young people, this paper reports the findings from three roundtable discussions with a total of eight former/current ILO Tokyo Office interns (20s-30s) conducted in June 2020. Listening to the real voices of each individual, this paper identifies the impacts of the pandemic experienced by ILO interns as well as the elements influencing young people's careers even before the outbreak in Japan. Besides, some ideas are noted to overcome the existing issues with a hope to suggest what “the future of work” might be from young people’s perspective.

The impact of the pandemic faced by ILO interns

To find out individual circumstances and feelings of young people in this pandemic in terms of their careers, three roundtable discussions were held to share the situations which each individual was facing during this crisis and exchange their views on their careers.

Employment: While the impact of the pandemic has not emerged as an immediate employment problem, it has created a situation that could affect future employment for young people such as temporary suspensions of projects and job searching, and cancellation of planned research.

Reduction in working hours and income: A roundtable participant experienced a reduction in the period of employment, which resulted in a reduction in income. Other participants also went through income reduction, which made them difficult to pay student loan and rent.

Gender: The obstacles to balancing childcare and career were pointed out, although the participants haven’t observed new problems arise from the pandemic yet.

Teleworking: Roundtable participants have partially or fully adopted teleworking including online training due to the outbreak. While starting a new job fully online seemed to be challenging, those who had started their job before the pandemic tend to find positive aspects of teleworking.

Education and Training: With the cancellation of studying abroad, some participants had to reconsider their future career plans.

Roundtable participants often referred to problems that had persisted since before the pandemic when they talked about their concerns about their future careers. There are five themes;

- Tokyo centralization caused a significant disparity in terms of academic and employment options between rural and metropolitan areas, which makes young people move to Tokyo.

- Although working long hours affects workers' mental health, turnover, quality of life, and even relationships and marriages, there is a lack of awareness of the risks of working long hours in the workplace and among workers themselves.

- Many participants considered pursuing one’s career while engaging with childcare challenges. This concern could be derived from the current situation of a significant gender bias in the division of unpaid work, long working hours in paid work and evaluation standards in workplaces, and a lack of role models.

- While the number of consultations regarding harassment is on the rise, harassment against young people both in the workplace and in the recruitment process makes it difficult to remain in the workforce. Many victims cannot/do not talk about what their harm because they do not consider talking/consulting helpful.

- This unique recruiting system in Japan benefits companies in terms of a regular human resource supply and easiness in training new employees. However, students tend to suffer from the pressure of not being able to fail because of the difficulty of finding jobs for those who have already graduated and are not categorized as “new graduates”. [2] Furthermore, as students decide on companies in a rush, a mismatch with a company after starting to work leads to an early leaving from the job.

- The blank in a career (period of unemployment) tends to be considered negatively, which makes young people feel uneasy about not being part of an organization/ institution/ company. This idea of a continued linear career puts women who often leave the workforce because of childbirth/childcare in a difficult position.

- Japanese companies often place a high value on training generalists through such as “job rotation”, which allows employees to gain experience in a variety of tasks. However, frequent transfers with ambiguous objectives can reduce the individual's freedom to build a career, as motivation to work is reduced and expertise is barely developed.

- More and more people undertake self-education to acquire the knowledge necessary for their jobs and future career development. However, long working hours could reduce learning opportunities. Besides, the financial burden of learning could be an obstacle.

Ideas for the better future of work

In response to the problems we discussed, which persisted since before COVID-19, this paper has proposed the following ideas that may lead to solutions to the issues, hoping that these ideas provide hints for a better future of work. 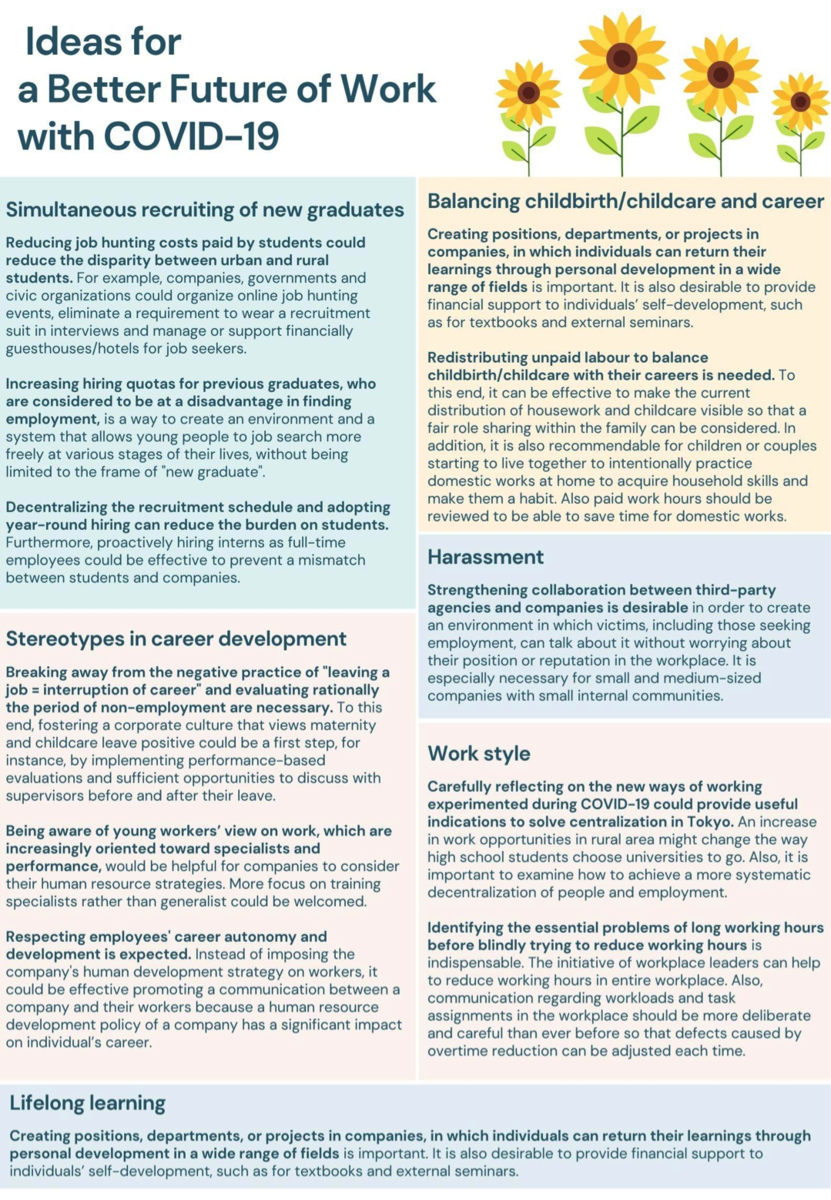 [1] In Japan, companies generally conduct a recruitment test within a limited period (mainly in springtime), recruit students who are about to graduate simultaneously and at once, and new graduates start work immediately after graduation.

COVID-19 has transformed our lives and exposed the challenges faced by different groups, including migrant workers and women. The ILO Monitor: COVID-19 and the world of work. Fourth edition focuses on the impact of novel coronavirus on young people[1].

The monitoring report points out the triple shock that young people are facing:

(1) Over one in six young people surveyed have stopped working since the onset of the COVID19 crisis. Among young people who have remained in employment, working hours have fallen by 23%;

(2) Education and training are also suspended;

(3) Emergence of larger obstacles to finding work, (re-)entering the labour market and trying to transition to better jobs.

The report, "Youth&COVID-19: Impacts on Jobs, Education, Rights and Mental Well-being," released on August 12 on the occasion of International Youth Day, includes a survey of more than 12,000 young people (18-34 years old) in approximately 112 countries. The report analysed in four areas: employment, education and training, mental well-being, and youth rights.

Through these surveys, a question came to our mind:

What do young people really think and feel about their careers in this pandemic?

Inspired by the ILO survey on the impact on young people, we conducted three roundtable discussions with a total of eight former/current ILO interns to "visualize" actual influence on their careers. In this paper, Chapter 2 outlines the content of the ILO report, and Chapter 3 identifies the consequences of the pandemic, which are evident in episodes that emerged from the roundtable discussions. Chapter 4 addresses some elements suggested in the roundtable that has influenced young people's careers even before the outbreak and offers ideas for overcoming these issues. Through this report, we hope to suggest what "the future of work" might be from young people's perspective.

Listening to the real voices of each individual is as important as macroscopic analysis and data used in ILO monitoring reports because the impact of the pandemic varies from person to person. This attitude resonates with the Sustainable Development Goals (SDGs) which pledged to "leave no one behind" on the planet. We believe that individual stories will help us to better understand the reality of the impact of the pandemic.

2. The impact of the pandemic on youth according to the ILO report

First, we will review the impact suggested in the report "Youth&COVID-19: Impacts on Jobs, Education, Rights and Mental Well-being"[2].

Concerning "employment", the report identifies the following impacts, noting that young people have been facing a tough labor market even before the COVID-19 outbreak occurred:

This enormous impact could deprive young people of employment prospects in the long term. The report calls for an urgent, large-scale, targeted employment policy response to protect an entire generation of young people.

Concerning "education and training", the analysis included not only formal education in educational institutions but also informal education. From the results of the questionnaire, the report states that the following impacts:

Concerning "mental well-being" almost half of the respondents were found to be potentially affected by anxiety or depression. Although expectations for the future motivate the young people to start decent work, approximately 54% of young people are now worried about their future because of the pandemic.

As we have seen above, the impact of the new coronavirus is varied. However, the results also revealed that one in four respondents engaged in volunteer work and donations. Moreover, they made efforts to connect with friends and family during the quarantine through social networking services and platforms.

[2] The ILO survey covers a total of 12,605 young people aged 18-34. The report defines young people as 18-29 years old and analyses the survey results for 30-34 years old as a comparator. The young people who responded were mainly young workers with higher education. A total of 112 countries responded to the survey, but since the questionnaire was administered online, it does not adequately reflect the voices of young people in low-income countries.